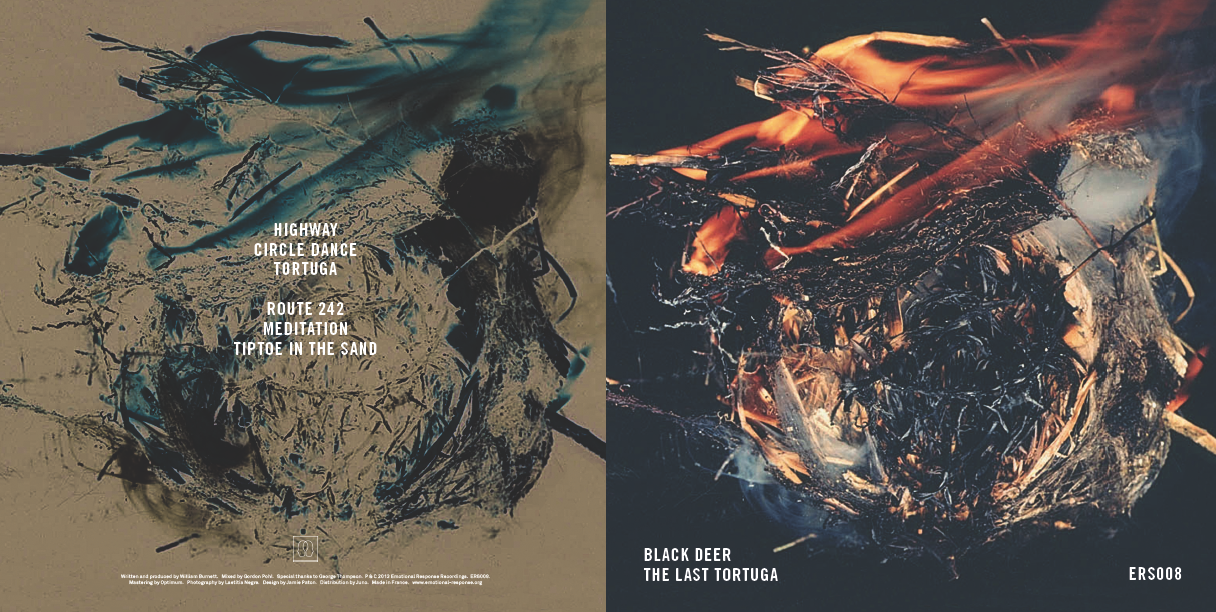 With an increasing legion of admiring listeners, William Burnett has steadily built a catalogue of music across a myriad of labels.    After gaining notice with Grackle before going overground with his House / Techno explorations as Willie Burns, it is now with Black Deer you will find his production develop and expand to take in ambient, drone and krautrock to highlight his musicianship in a new light.

This esoteric “sympathetic storytelling” is far removed from his Willie Burns outings on Creme, TTT or L.I.E.S, but still anchored in a sort of yearning for transcendent moods and grooves.  First appearing on Rush Hour’s “No Label” early in 2013, it is here on The Last Tortuga that his ideas are fully realised with an introspection to match the shimming and shifting simplicity.

Thoughts distilled, forgotten dreams, memories half remembered, the EP captures an uncertain melancholy and hazy vision of a real America.  The expansive opening of Highway and Circle Dance are the closest to club tracks with syncopated drums and 909 underpinning intricate layers of simple instrumentation that draws you further inwards.

Following is the ritualistic ambience of Tortuga.   Here is Black Deer laid-bare, the search for minimal to create maximum.   Guitar, fx, stabs and a kick.

The flip opens with a nod across the ocean in Route 242.   Having extensively travelled to DJ and meet with this peers – notably Danny Wolfers (Legowelt/Nacho Patrol) and Gordon Pohl (Musiccargo) – William mixes Detroit claps alongside Ghent vibes to perfectly avoid the perils of a pure homage with something new and unique.

At last though we reach the centrepiece, Meditation.  Melding krautrock bass pulses with swirling guitar licks and gentle (raindance) percussions the track unravels to reveal Black Deer vision that is incomparable with his previous pseudonyms.

Finally to end is Tiptoe In The Sand.   A sister to Tortuga, it’s dark astral spirituality harks to desert nights and new dawns.