Brain Machine’s story was initially a well kept secret, a mystery hiding behind misinformed press releases and false names in order to tell half-truths via vague explanations.   However, while their debut album became a lost classic, the release of the remixes EP has cast a new light on the project and the people behind it.

After moving to London from Rome for his studies during the early 90s, a young producer by the name of Guido Zen soon landed a position of studio engineer, working on a number big UK club tracks.  Branching out on this own he started recorded house and techno before moving in to more abstract, experimental and ambient music forms, which would eventually see him co-running the Unbearable Recordings label, alongside a day job working on film and TV soundtracks.

As the label’s output decreased, Guido teamed up one Juan T Trippe, aka one of the many alias’s of Lo Recordings boss Jon Tye. Then best known for his production work as Black Mustang, he is perhaps now infamous as one of half of Seahawks duo, alongside artist Pete Fowler.

Initially coming out of jamming sessions, the sound of Brain Machine seemed almost totally fully-formed from the start, however almost four years of sending music back and forth occurred before the LP was eventually released.

It was a record that shared a contemporary kosmische approach but also including elements of minimal techno and the more experimental end of the Scandinavian disco scene of the last decade.

With the remixes finally seeing the light of day, the protagonists have got back again together again and now include new member Kyle Martin from Land Of Light, working towards a follow up album, with plans for it’s release on Emotional Response in 2015. 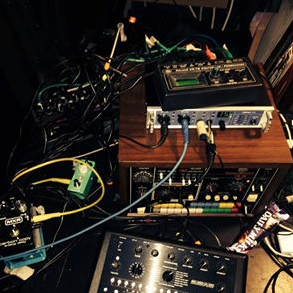